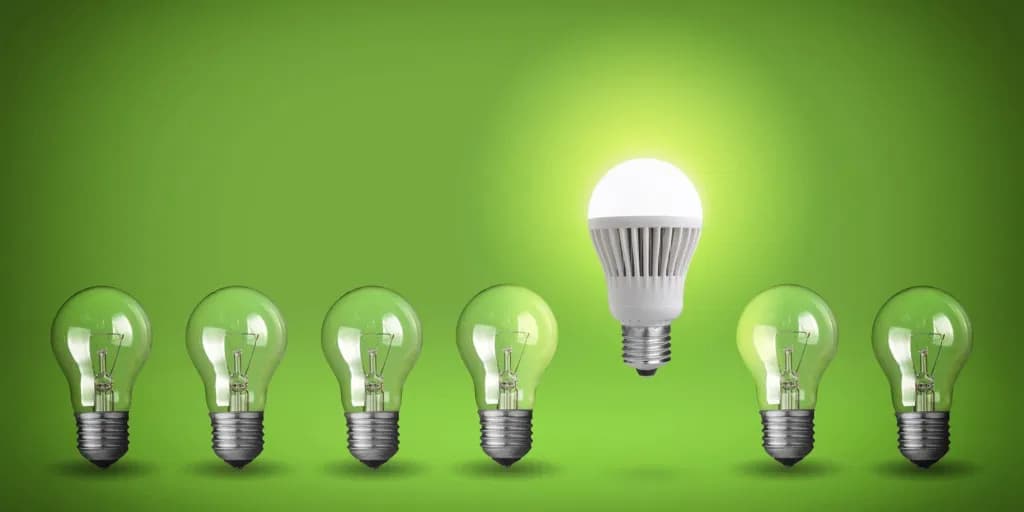 The history of SSL technology has been a slow and steady journey. Henry Joseph Round first noted electroluminescence in solid-state silicon carbide, in the early 20th century. While the phenomenon was certainly curious, it was hardly of any practical use at the time. The materials were difficult to handle and the light produced was very dim. It wasn’t until the 1950s and 1960s that real development of modern LEDs began.

In the 1950s, gallium arsenide (GaAs) was the electroluminescent compound of interest. It was noted that it produced invisible infrared light when an electric current was applied. In 1961, Gary Pittman and Bob Biard, researchers for Texas Instruments, received the original patent for the infrared light-emitting diode, the LED. The following year, the first visible red LED was produced using gallium arsenide phosphate (GaAsP) by General Electric researcher Nick Holonyak, Jr. When applied to a gallium phosphate substrate, efficiency increased creating a brighter red, and also allowing for the emission of orange light. They began replacing incandescent indicators in a whole range of equipment such as TV’s, radios, calculators, laboratory equipment, and eventually watches and phones.

During the 1970s, technology allow for the production and refinement of a whole new spectrum of LED colors which greatly expanded their use. With the development of gallium aluminum arsenide (GaAlAs) during the 1980s, LEDs were able to emit a level of brightness ten times that of the previous generations, in addition to lowering voltage requirements, with red, yellow, and green lights. With these efficiencies, the potential for LEDs to replace traditional lighting began to unfold.

Indium was added to the compound in the early 90s to produce indium gallium aluminum phosphide (InGaAlP) in order to emit orange-red, orange, yellow and green light of the same brightness and efficiency. The first high intensity blue light was produced with indium gallium nitride (InGaN). Once coated with phosphor, these ultra bright blue chips emitted bright white light. This bright white light technology coupled with the power savings generated by lower voltage requirements cemented LEDs as the ideal lighting option of the future.

The appropriate color of white light can be determined using Correlated Color Temperature (CCT). This describes the tone of the white light, ranging from warmer golden yellows to cooler blues. CCT is measured in the SI unit of absolute temperature known as a Kelvin. The “color temperature” is correlated to a theoretical black body, that when heated to high temperatures, changes from red, orange, yellow, white, then blue. The temperature needed to match each color, respectively, is known as its CCT.

As a general rule, warmer light indoors should be used indoors, and whiter light outdoors.

A bulb with a color temperature of 5000-7000 Kelvin should be used outdoors, as the whiter light allows the eye to see better at night.

Incandescent bulbs give off about 90% of the energy they consume in the form of heat, leaving only 10% used to produce light. This equates to about 85 BTUs/hour.

The average lifespan of an incandescent bulb is between 750 to 2500 hours.

CFL Light Bulbs, also known as Compact Fluorescent Lighting, creates light by passing electricity through a tube containing gases. This reaction produces ultraviolet light that is transformed into visible light by the phosphor coating inside the tune. CFLs use approximately 50 to 80% less energy than incandescent bulbs and last 10 times as long. They also run 75% cooler. CFL bulbs contain mercury, which is considered a toxic metal. While present in small amounts, burned out or broken bulbs must be treated as hazardous waste material when disposed of.

LED Lighting stands for Light Emitting Diodes. LEDs are small light sources that become illuminated by the movement of electrons through a semiconductor material.

LEDs are cool to the touch and 90% of the energy they consume is given off in the form of light, with less than 10% given off as heat. They use up to 90% less energy than incandescent bulbs.

LEDs are rated to last between 35,000-50,000 hours, which is at least 20 times that of an incandescent bulb. LEDs, however, don’t “burn out” as an incandescent or CFL bulb would. The lifetime of an SSL lamp is generally considered to be the point where the light output has declined to 70% of its initial output, measured in lumens. So instead of burning out after 35,000 hours, the bulb will only be slightly dimmer.

Unlike incandescent lamps, LEDs are not inherently white light sources. Instead, LEDs emit nearly monochromatic light, making them highly efficient for colored light applications such as traffic lights and exit signs. However, to be used as a general light source, white light is needed. White light can be achieved with LEDs in three ways:

The potential of LED technology to produce high-quality white light with unprecedented energy efficiency is the primary motivation for the intense level of R&D currently supported by the U.S. Department of Energy.

HOW IS LED LIGHTING DIFFERENT FROM OTHER ENERGY-EFFICIENT LIGHTING TECHNOLOGIES?

LEDs offer the potential for cutting general lighting energy use nearly in half by 2030, saving energy dollars and carbon emissions in the process. Their unique characteristics—including compact size, long life and ease of maintenance, resistance to breakage and vibration, good performance in cold temperatures, lack of infrared or ultraviolet emissions, and instant-on performance—are beneficial in many lighting applications. The ability to be dimmed and to provide color control are other benefits of LED lights.

One of the defining features of LEDs is that they emit light in a specific direction, which reduces the need for reflectors and diffusers that can lower efficiency. In contrast, fluorescent and “bulb”-shaped incandescent lamps emit light in all directions, with the result that much of the light they produce is lost within the fixture or escapes in a direction not useful for the intended application. With many fixture types, including recessed downlights, troffers, and undercabinet fixtures, it is not uncommon for only 50 to 60% of the total light produced to be emitted.

In addition, LED sources are inherently dimmable and instantaneously controllable, and they can be readily integrated with sensor and control systems, thus enabling further energy savings through the use of occupancy sensing, daylight harvesting, and local control of light levels. What’s more, the high-speed modulation capability of semiconductor light sources has introduced new opportunities and features, such as indoor positioning capabilities, and LED technology also offers the prospect of full color control over the light spectrum. What this all adds up to is the potential to improve the performance and value of lighting in totally new ways.

HOW ENERGY EFFICIENT ARE LEDS?

LED lighting has the potential to be more energy efficient than any other known lighting technology. But, two aspects of energy efficiency are important to consider: the efficiency of the LED device itself (source efficacy) and how well the device and fixture work together in providing the necessary lighting (luminaire efficacy). How much electricity is consumed depends not only on the LED device, but also on the lighting fixture design. Because they are sensitive to thermal and electrical conditions, LEDs must be carefully integrated into lighting fixtures. The efficiency of a poorly designed fixture that uses even the best LEDs will be only a fraction of what it would be if the fixture were well-designed, and the design can also affect lumen maintenance.

Key aspects of high-quality light are the color appearance of the light itself, which is described by its correlated color temperature (CCT), and how the light affects the color appearance of objects, which is commonly called color rendition. Color rendition can be quantified using the color rendering index (CRI), or with one of several other recently developed metrics. LED light sources have demonstrated that they can achieve a wide range of color quality, depending on the demands of the lighting application. However, in order to achieve high levels of color quality, there are typically cost and efficiency tradeoffs. In general, a minimum CRI of 80 is recommended for interior lighting, and LED products can readily achieve this performance. CRIs of 90 or higher indicate excellent color fidelity; LEDs can also meet this threshold. CRI is far from a perfect metric and is especially poor at predicting the fidelity of saturated reds, for which the supplemental value R9 is often used. New metrics, such as the fidelity index (Rf) and the gamut index (Rg­), which are described in IES TM-30-15, can provide a more comprehensive evaluation of color rendering.

How Long Do LEDs Last?

LED luminaire useful life is often described by the number of operating hours until the LED luminaire is emitting 70 percent of its initial light output. Good-quality white LED lighting products are expected to have a useful life of 30,000 to 50,000 hours or even longer. A typical incandescent lamp lasts about 1,000 hours; a comparable CFL, 8,000 to 10,000 hours; and the best linear fluorescent lamps, more than 30,000 hours.

A primary cause of lumen depreciation is heat generated at the LED junction. Unlike other light sources, LEDs don’t emit heat as infrared radiation, so it must be removed by conduction or convection. Thermal management is arguably the most important aspect of successful LED system design.

There are many white LED products available on the market, and the number continues to grow, with new generations of devices constantly emerging. While many of these products perform quite well, their quality and energy efficiency can vary widely. There are standards, test procedures, and resources such as LED Lighting Facts®, ENERGY STAR®, and the DesignLights Consortium’s™ Qualified Products List that can enable buyers to make informed decisions when evaluating LED lighting.

LED lighting technology has improved dramatically over the past 10 years. Improvements in technology have enabled LEDs to achieve among the highest efficiencies of available white-light sources. Improvements in manufacturing have enabled LED products to achieve a low enough cost that there has been measurable LED adoption in all general illumination applications. Despite this progress, further improvements are both possible and desirable. The technology can be improved in efficiency and in other features, such as color quality, light distribution, form factor, and building integration. The manufacturing technology for LED lighting can also be improved to reduce cost and increase market penetration, resulting in the greatest possible energy savings for the nation.