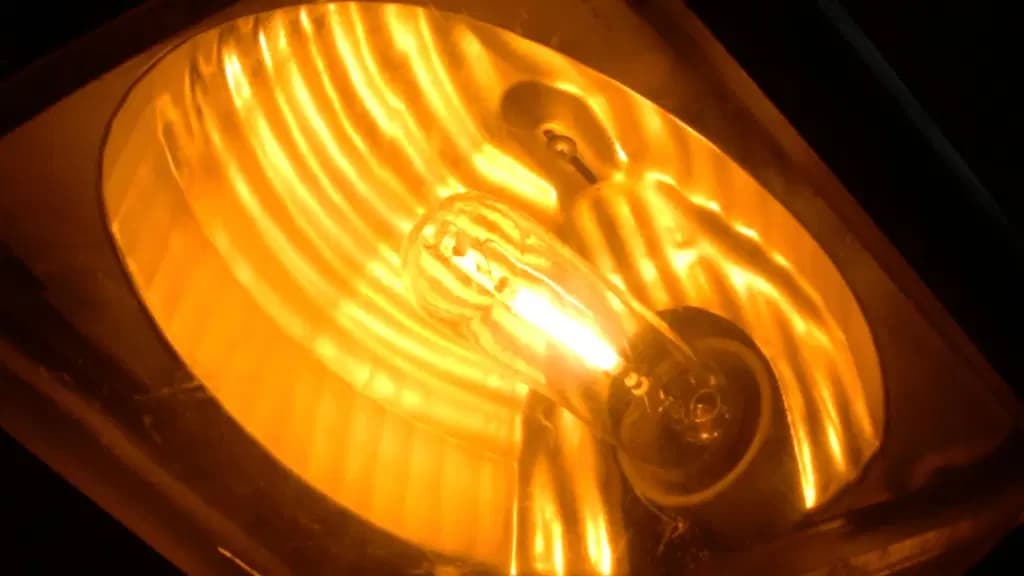 High Pressure Sodium lamps are shaped differently than Metal Halide lamps. A ceramic arc tube contains sodium and mercury, with a little xenon gas for starting. The sodium discharge dominates the color, producing the orange-red light. Electricity passes through electrodes at the ends of the arc tubes. If the lamp is turned off or a power surge occurs, the gasses will need to cool three to 15 minutes before restarting is possible.

Some manufacturers also make a standby version of their HPS bulb which features an extra arc tube that restrikes instantly after brief power interruptions and returns to full light output within one to two minutes. This feature can be extremely important in applications where safety or security are primary considerations. As an added plus, most of these lamps have an average rated life of 40,000 hours. In all other respects they provide performance equivalent to standard HPS lamps.

Low-pressure sodium (LPS) lamps have a borosilicate glass gas discharge tube (arc tube) containing solid sodium and a small amount of neon and argon gas Penning mixture to start the gas discharge. The discharge tube may be linear (SLI lamp) [2] or U-shaped. When the lamp is turned on it emits a dim red/pink light to warm the sodium metal and within a few minutes it turns into the common bright yellow as the sodium metal vaporizes.

These lamps produce a virtually monochromatic light averaging at a 589.3 nm wavelength (actually two dominant spectral lines very close together at 589.0 and 589.6 nm). As a result, the colors of illuminated objects are not easily distinguished since they are seen almost entirely by their reflection of this narrow bandwidth yellow light.

LPS lamps have an outer glass vacuum envelope around the inner discharge tube for thermal insulation, which improves their efficiency. Earlier types of LPS lamps had a detachable dewar jacket (SO lamps). Lamps with a permanent vacuum envelope (SOI lamps) were developed to improve thermal insulation [4]. Further improvement was attained by coating the glass envelope with an infrared reflecting layer of indium tin oxide, resulting in SOX lamps.

LPS lamps are the most efficient electrically-powered light source when measured for photopic lighting conditions up to 200 lm/W, primarily because the output is light at a wavelength near the peak sensitivity of the human eye. As a result they are widely used for outdoor lighting such as street lights and security lighting where faithful color rendition is considered unimportant. LPS lamps are available with power ratings from 10 W up to 180 W; however, longer bulb lengths create design and engineering problems.

LPS lamps are more closely related to fluorescent than high intensity discharge lamps, since they have a low-pressure, low-intensity discharge source and a linear lamp shape. Also like fluorescents they do not exhibit a bright arc as do other HID lamps; rather they emit a softer luminous glow, resulting in less glare. Unlike HID lamps, which can go out during a voltage dip, low pressure sodium lamps restrike to full brightness rapidly.

Another unique property of LPS lamps is that, unlike other lamp types, they do not decline in lumen output with age. As an example, mercury vapor HID lamps become very dull towards the end of their lives, to the point of being ineffective, while continuing to consume full rated electrical use. LPS lamps, however, do increase energy usage slightly (about 10%) towards their end of life, which is generally around 18,000 hours for modern lamps.

Spectrum of high pressure sodium lamp. The yellow-red band on the left is the atomic sodium D-line emission; the turquoise line is a sodium line which is otherwise quite weak in a low pressure discharge, but become intense in a high pressure discharge. Most of the other green, blue and violet lines arise from mercury.

High pressure sodium lamps are quite efficient, at about 100 lm/W when measured for photopic lighting conditions. They have been widely used for outdoor lighting such as streetlights and security lighting. Understanding the change in human color vision sensitivity from photopic to mesopic and scotopic is essential for proper planning when designing lighting for roads. Because of the extremely high chemical activity of the high pressure sodium arc, the arc tube is typically made of translucent aluminium oxide. This construction led General Electric to use the tradename “Lucalox” for their line of high-pressure sodium lamps.

Xenon at a low pressure is used as a “starter gas” in the HPS lamp. It has the lowest thermal conductivity and lowest ionization potential of all the non-radioactive noble gases. As a noble gas, it does not interfere with the chemical reactions occurring in the operating lamp. The low thermal conductivity minimizes thermal losses in the lamp while in the operating state, and the low ionization potential causes the breakdown voltage of the gas to be relatively low in the cold state, which allows the lamp to be easily started.

An amalgam of metallic sodium and mercury lies at the coolest part of the lamp and provides the sodium and mercury vapor in which the arc is drawn. The temperature of the amalgam is determined to a great extent by lamp power. The higher the lamp power, the higher will be the amalgam temperature. The higher the temperature of the amalgam, the higher will be the mercury and sodium vapor pressures in the lamp. An increase in these metal pressures will cause an increase in the electrical resistance of the lamp. As the temperature rises, the flow of current being maintained constant results in an increase in power until the nominal power is reached. For a given voltage, there are generally three modes of operation:

The first and last states are stable, because the lamp resistance is weakly related to the voltage, but the second state is unstable. Any anomalous increase in current will cause an increase in power, causing an increase in amalgam temperature, which will cause a decrease in resistance, which will cause a further increase in current. This will create a runaway effect, and the lamp will jump to the high-current state (#3). Since actual lamps are not designed to handle this much power, this would result in catastrophic failure. Similarly, an anomalous drop in current will drive the lamp to extinction. It is the second state which is the desired operating state of the lamp, because a slow loss of the amalgam over time from a reservoir will have less effect on the characteristics of the lamp than a fully evaporated amalgam. The result is an average lamp life in excess of 20,000 hours.

In practical use, the lamp is powered by an AC voltage source in series with an inductive “ballast” in order to supply a nearly constant current to the lamp, rather than a constant voltage, thus assuring stable operation. The ballast is usually inductive rather than simply being resistive which minimizes resistive losses. Also, since the lamp effectively extinguishes at each zero-current point in the AC cycle, the inductive ballast assists in the reignition by providing a voltage spike at the zero-current point.

The light from the lamp consists of atomic emission lines of mercury and sodium, but is dominated by the sodium D-line emission. This line is extremely pressure (resonance) broadened and is also self-reversed due to absorption in the cooler outer layers of the arc, giving the lamp its improved color rendering characteristics. In addition, the red wing of the D-line emission is further pressure broadened by the Van der Waals forces from the mercury atoms in the arc.