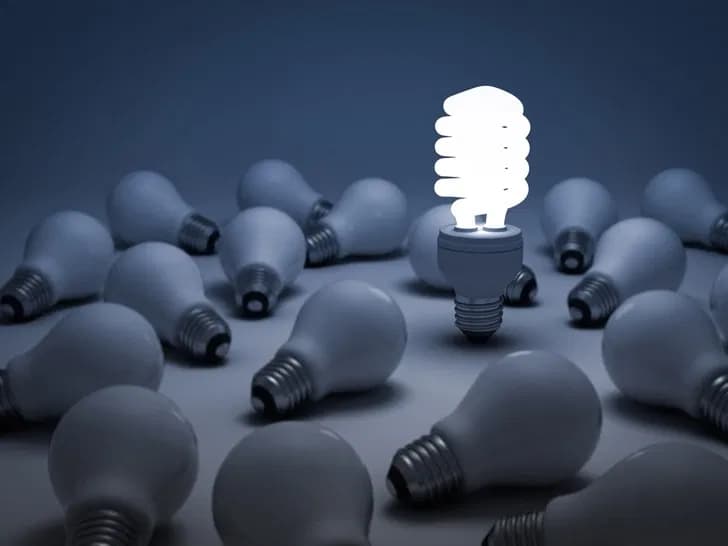 A fluorescent lamp consists of a glass tube that is filled with mercury vapor at low pressure. The inside of the tube is coated with a phosphorous substance. Two coiled metal (tungsten) filaments are at each end of the tube. When an electric current flows through the filaments they start to get hot and glow (like a regular light bulb). When we apply a voltage between the two filaments and electrons get sucked from one filament to the other. While zipping through the tube, electrons crash into mercury atoms, which start to glow and send out ultra-violet (UV) light.

UV-light is very, very violet. Actually it is so violet that you can’t see it, but you can get a sunburn from it. So on its own UV-light wouldn’t make a useful lamp: that’s why there is a phosphorous substance in the inside of the glass tube. When UV-light hits the phosphor atoms, they absorb the UV light and send out the white light that illuminates your room. The conversion of light from one type to another is called fluorescence, which gave the fluorescent lamp its name. Fluorescent lights conserve energy. For the same amount of light they need less power than usual light bulbs. By the way, the funny shaped light bulbs made of bent glass tubes in the supermarket are actually fluorescent lamps. Please don’t play and break fluorescent lamps: they contain chemicals that are poisonous. When disposing of a fluorescent lamp, you should call the Recycling Center!

The central element in a fluorescent lamp is a sealed glass tube. The tube contains a small bit of mercury and an inert gas, typically argon, kept under very low pressure. The tube also contains a phosphor powder, coated along the inside of the glass. The tube has two electrodes, one at each end, which are wired to an electrical circuit. The electrical circuit, which we’ll examine later, is hooked up to an alternating current (AC) supply. 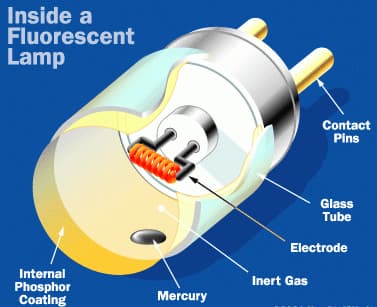 When you turn the lamp on, the current flows through the electrical circuit to the electrodes. There is a considerable voltage across the electrodes, so electrons will migrate through the gas from one end of the tube to the other. This energy changes some of the mercury in the tube from a liquid to a gas. As electrons and charged atoms move through the tube, some of them will collide with the gaseous mercury atoms. These collisions excite the atoms, bumping electrons up to higher energy levels. When the electrons return to their original energy level, they release light photons.

As we saw in the last section, the wavelength of a photon is determined by the particular electron arrangement in the atom. The electrons in mercury atoms are arranged in such a way that they mostly release light photons in the ultraviolet wavelength range. Our eyes don’t register ultraviolet photons, so this sort of light needs to be converted into visible light to illuminate the lamp.

This is where the tube’s phosphor powder coating comes in. Phosphors are substances that give off light when they are exposed to light. When a photon hits a phosphor atom, one of the phosphor’s electrons jumps to a higher energy level and the atom heats up. When the electron falls back to its normal level, it releases energy in the form of another photon. This photon has less energy than the original photon, because some energy was lost as heat. In a fluorescent lamp, the emitted light is in the visible spectrum — the phosphor gives off white light we can see. Manufacturers can vary the color of the light by using different combinations of phosphors.

Overall, a typical fluorescent lamp is four to six times more efficient than an incandescent lamp. People generally use incandescent lights in the home, however, since they emit a “warmer” light — a light with more red and less blue.

As we’ve seen, the entire fluorescent lamp system depends on an electrical current flowing through the gas in the glass tube.

Today, the most popular fluorescent lamp design is the rapid start lamp. This design works on the same basic principle as the traditional starter lamp, but it doesn’t have a starter switch. Instead, the lamp’s ballast constantly channels current through both electrodes. This current flow is configured so that there is a charge difference between the two electrodes, establishing a voltage across the tube.

A fluorescent bulb uses a completely different method to produce light. There are electrodes at both ends of a fluorescent tube, and a gas containing argon and mercury vapor is inside the tube. A stream of electrons flows through the gas from one electrode to the other (in a manner similar to the stream of electrons in a cathode ray tube). These electrons bump into the mercury atoms and excite them. As the mercury atoms move from the excited state back to the unexcited state, they give off ultraviolet photons. These photons hit the phosphor coating the inside of the fluorescent tube, and this phosphor creates visible light. It sounds complicated, so lets go through it again in slow motion:

-There is a stream of electrons flowing between the electrodes at both ends of the fluorescent bulb.

-The electrons interact with mercury vapor atoms floating inside the bulb.

-The mercury atoms become excited, and when they return to an unexcited state they release photons of light in the ultraviolet region of the spectrum.

-These ultraviolet photons collide with the phosphor coating the inside of the bulb, and the phosphor creates visible light. The phosphor fluoresces to produce light.