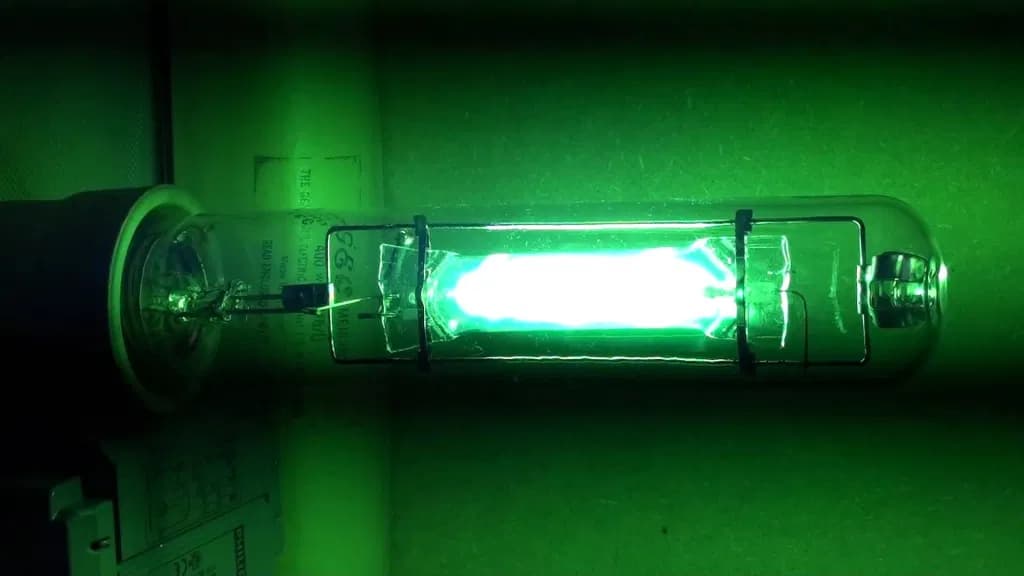 A mercury-vapor lamp is a gas discharge lamp that uses mercury in an excited state to produce light. The arc discharge is generally confined to a small fused quartz arc tube mounted within a larger borosilicate glass bulb. The outer bulb may be clear or coated with a phosphor; in either case, the outer bulb provides thermal insulation, protection from ultraviolet radiation, and a convenient mounting for the fused quartz arc tube.

A closely-related lamp design called the metal halide lamp uses various compounds in an amalgam with the mercury. Sodium iodide and Scandium iodide are commonly in use. These lamps can produce much better quality light without resorting to phosphors. If they use a starting electrode, there is always a thermal shorting switch to eliminate any electrical potential between the main electrode and the starting electrode once the lamp is lit. (This electrical potential in the presence of the halides can cause the failure of the glass/metal seal). More modern metal halide systems do not use a separate starting electrode; instead, the lamp is started using high voltage pulses as with high-pressure sodium vapor lamps. “MetalArc” is Osram Sylvania’s trademark for their metal halide lamps; “Arcstream” and “MultiVapor” are General Electric’s trademark. Besides their use in traditional outdoor lighting, these lamps now appear in most computer and video projectors. However, Philips’ UHP lamp, introduced in 1995, contains only mercury. As an example of application and efficiency of mercury lamps, the 61″ Samsung DLP rear projection TV (HL-S6187W) uses a 132-watt Philips UHP lamp.

There are mercury vapor lamps with a filament inside connected in series with the arc tube that functions as an electrical ballast. This is the only kind of mercury vapor lamp that should be connected directly to the mains without an external ballast. These lamps have only the same or slightly higher efficiency than incandescent lamps of similar size, but have a longer life. They give light immediately on startup, but usually needs a few minutes to restrike if power has been interrupted. Because of the light emitted by the filament, they have slightly better color rendering properties than mercury vapor lamps. The color temperature is higher than incandescent lamps.